I’ve been yearning for Horizon Zero Dawn for quite the while; it’s finally here in my PlayStation 4. I’ve spent a few hours with the game and these are my initial thoughts.

Beauty In The Beast

All about stealth kills.

It sounds really cool on a surface level: hunting robotic dinosaurs in a post-apocalyptic world. Horizon is so much more than pretty graphics or a fascinating premise. This game is about relationships between human beings, through their love and their hatred for one another. Sure, there are massive machines to be slain, but that almost seems secondary when it comes to the narrative of the game. 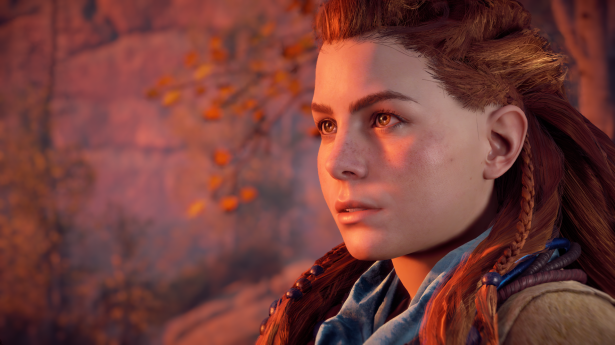 You play as a young female protagonist in Horizon Zero Dawn. Playing as a female character obviously isn’t new to video games, but the fact that this high-budget game centers around one is telling of the industry as a whole and where it’s heading. I personally think it’s fantastic and hope to see more lead characters from a variety of backgrounds.

The story hovers around human outcasts and the many taboos they choose not to face. I’ve already felt a connection with the narrative that I rarely experience this early in any game, especially a new franchise like this one.

Some of the machines in Horizon are pretty terrifying once they’ve spotted you and begin to rush at you. The adrenaline that I’ve experienced when running and dodging from these things is insane. The gameplay isn’t necessarily revolutionary, but it’s so well done that I’m left more than satisfied.

Again, back to the story of the game, this game is about hunting more than machines. It’s a hunt for acceptance in a world of tradition. Where there are strict rules, there are those that suffer from exclusion.

I look forward to playing more of Horizon and sharing more of my thoughts on the game with you. Thanks for reading!

Tomorrow is kind of a big deal for me.

A tiny, insignificant game by the name of Final Fantasy XV launches for Playstation 4 and Xbox One.  This game has been in development for 10 years. 10 YEARS. Wrap your brain substance around that reality. That’s a decade of uncertain waiting. 10 years of “Is this game cancelled or not?” and “I hope they don’t break my childhood dreams.” A lot has changed since 2006. I could go into all the details, but I won’t bore you. Instead, let’s jump into what Final Fantasy means to me and what I hope to get out of this game.

Fantasee What I Did There?

My first game in the series was Final Fantasy X. I had known about Final Fantasy for years, but never got around to playing any of them. I knew the music was amazing and that they were critically acclaimed, but what really made these games so special? So I dove into FFX like a glutton into a pool of dark chocolate. I found that there was more than just chocolate. There were all types of candy in this metaphorical pool of diabetes. It was so good, I came back to the “meal” several years later and did it all again. Everything about FFX captivated me. The story was emotional; the characters were quirky; the game had full voice acting; I fell in love with Nobuo Uematsu’s compositions; the game was just fun. I decided to take a backwards journey into Final Fantasy’s past.

A Taste of History

They’ve still got Chocobos in XV.

I tried out Final Fantasy I, III, VI, and VII and didn’t beat any of them (still working on VI). What did I learn? I don’t know if I learned anything necessarily useful, but I did come to realize why people loved Final Fantasy so deeply. Everything about the games was meaningfully crafted. My biggest takeaway was that these games were art. These games made me feel like humans could do some good once in a while. Then Final Fantasy XIII launched and let’s just forget I even mentioned that game. Cool? Cool.

Then There Were XV

I’ve seen and read enough about FFXV to know that I’m going to enjoy the game. I just don’t know if it’s going to be worth the wait that I was put through so cruelly. Few things could justify a 10-year waiting period. The game may not live up to the amount of hype that’s been built up for it, but that’s okay. I think. It seems to be doing quite well with the critics, but is that really what matters? What I really want is to finally toss this game into my console and immerse myself in fantastical Japanese-meets-western-mania. I just want to play a Final Fantasy that is special in its own right. At the same time, give me Chocobos or give me death. Preferably Chocobos. Lots of Chocobos.